I love a road trip. Chuck a bag in the boot, pack as few items of clothing as necessary, it has become a bit of a ritual challenge to see what treasure we can find to wear in the different towns we stop in for the evening. Sometimes it’s a funky shop, or market stall, other times, it can just be Kmart or Big W. We have found some great bargains!

We do the drive from Sydney to Melbourne a few times a year, and try to find back roads to investigate, and places to stop along the way we have never seen. October 2015, we decided to go inland instead of following the east coast, as we usually do. Following the Newell Hwy was approximately 855km’s but we chose a few detours which made the drive longer, so we stopped two nights on the way down.

It was a drizzly windy day as we merged with busy Sydney traffic, heading towards the Blue Mountains. Neither of us, me, or him who does the lawn mowing, had ever seen the Blue Mountains, so we were very excited. The drive was not as inspiring as I imagined it would be. Most of the way was very heavy traffic and the road was not scenic. After a bit of a struggle we found parking at Echo Point – it is a popular place, and put on coats for a look.

The Three Sisters rock formations are like myself and my two sisters, old, a bit weather beaten but still magnificent. Fabulous walks and photo opportunities are available from this look out, but the weather was closing in and it was freezing. Sadly we couldn’t stay any longer and bolted for the car as the rain set in.

Bathurst was next on our ‘places we have never been to’ list. The Mount Panorama track was ready for the big event and we wondered if we would be able to drive the circuit. The man around the house was jiggling with trepidation when we realised, not only was the track set up, but it was still open to the public. We joined the other cars doing just what we were doing, and followed the Super car circuit.

‘Oh What a Feeling…’

After an invigorating 6.213km averaging about 40km’s per hour, we left the frenetic racing world behind and zoomed into Parkes. As we approached, we could see the dish nestled in the hills. Excitement was oozing from my driver. He had made us watch the wonderful Australian film ‘The Dish’ before we left home.

The Parkes dish telescope was used to receive live, televised images of the Apollo 11 moon landing in July 1969. 64 meters across, it is very impressive, and there was some squealing from me, and a more subdued excitement from him, when we realised it moves, and quite frequently. The second largest in the Southern Hemisphere, it is one of the first large movable dishes in the world. 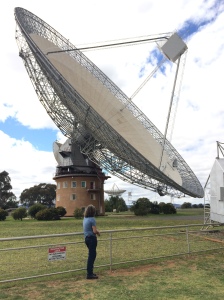 We stayed at The Station Motel in Parkes. It was modern, clean, very comfortable and reasonably priced. They offer free DVD’s which guests can borrow, including of course – The Dish. Midnight the cat is on the prowl and will accept a scratch. Microwave and toaster in room was a bonus and real milk not UHT.

They also have a nice restaurant, which I wish we had eaten at. We chose to dine at the local Leagues Club. The atmosphere was not relaxing and the food was of a dubious quality. The wine made up in quantity what it lacked in quality. I am a big fan of the NSW standard drink. Never disappointed.

Continuing the journey south, we hit West Wyalong just in time for lunch. We parked in the main street and walked the length of the town, peering in the closed shop windows. I was delighted when I entered The Royal Hotel. The restoration is sympathetic to the building, retaining the feel of it’s former glory. The ambiance is subdued and comfortable. We sat in Food Alley, the Garden of Eating, in the rear of the hotel was ideal for families with children.

Unable to refuse a steak sandwich and chips, what I was served was totally delicious. The toasted bread was soft in the middle and crunchy on the outside. Yuuummm. And the wine was perfect. Very enjoyable.

With tummies full – really full, the lunch was quite substantial, we hit the road to Tocumwal for the evening. Most people have heard of Tocumwal, but many say they have never been there. Glad we did. Tocumwal’s river foreshore has easy access to the Murray River from the Main Street. We had a lovely walk, and I had to get a photo with the giant Murray Cod. Love those great Aussie giant things. We stayed at the Bakery Park Motor Inn. Toasters in room. Clean, comfortable, quiet. Reasonably priced.

Dinner was at the Palms Pub. They offer pizza, particularly when they are busy. We were served someone else’s order, which we started eating before we realised it wasn’t ours. When they rocked up with our order, they offered to put it in a box and we could take it with us, but we had to decline. The pizza’s were tasty, but a bit on the heavy side. Thick crusts, a lot of cheese and quite oily. The Sax player accompanying the DJ was very good. It was an enjoyable evening on a balmy night. Nice ambiance, but don’t order pizza unless you are a big eater.

The might Murray beckoned us for another visit. The following morning was warm and sunny. We stopped at Thompsons beach, just before crossing the river into Cobram. It is  Australia’s largest inland beach. Good coffee at The Beach Café.

Shepparton was our lunch stop. It has been a long time since we visited Shepparton and the city centre was quite different, with a large friendly shopping mall capturing our attention. I bought a nice red dress with white polka dots for $10. We felt like fresh food, so we bought salads from a supermarket and sat in the Victoria Park Lake reserve. What a beautiful wetlands, and well utilised. People were lunching and walking all around the glorious landscaped areas.

Crazy Pelicans were fighting and annoying each other like rowdy children.

As well as posing beautifully for the camera.

The long weekend drive is a favourite. We do them often, to discover and enjoy, simple things that are special in their own ways.